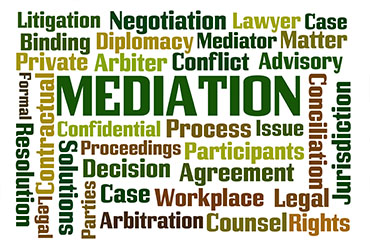 Mediation and arbitration are also known as ADR which stands for alternative dispute resolution. They are proceedings which can be used as an alternative to presenting a case to a judge or jury for a decision. Most court cases see an Order signed by the Judge requiring mediation to try to settle the case. Those conferences are surprisingly successful at resolving lawsuits in the Melbourne, Florida area. VolkLaw has experience in Mediation and Arbitration. Mr. Volk obtained qualified arbitrator status many years ago. Our attorneys have participated in hundreds of mediations.

Mediation is a supervised settlement conference presided over by a neutral mediator who suggests alternatives, analyzes issues, questions perceptions, uses logic, conducts private meetings of attorneys with their client, stimulates negotiation between the opposing sides and keeps order. The mediator does not hear any testimony, review any evidence or make a decision. The only result of the mediation conference is the agreement or non-agreement of the parties to settle their dispute. This is different than arbitration which involves a decision imposed on the parties by an arbitrator or arbitrators.

The mediator is usually a retired judge or attorney. While it could end quickly, you should plan to spend most of the day at a Mediation as these matters often go on at length.

Arbitration is a less-formal alternative to the traditional lawsuit in court. Instead of a judge or jury, participants in arbitration submit their claims to an arbitrator or panel of arbitrators. This alternative dispute resolution process is authorized under Florida and Federal law and our courts have consistently held that parties may waive the right to a jury trial by knowingly and voluntarily signing an agreement to arbitrate. Unlike other forms of alternative dispute resolution, arbitration is an adjudicatory process, and participants may be bound by the arbitrator's decision.

Arbitration begins when a participant files a statement of claim, submission agreement, and fees with a selected arbitration forum. The statement of claim is similar to a complaint filed in court. Upon receipt, respondents then file an answer or counter-claim. The participants choose an arbitration panel and proceed to conduct very limited discovery. The arbitration is conducted much like a lawsuit, wherein both sides present their cases with witnesses and exhibits. The Rules of Evidence which must be carefully followed in court may be relaxed in an arbitration. At the conclusion, a decision is rendered by majority rule, unless it was otherwise provided in an agreement.

Although arbitration is favored in law, it may not be an advantageous or prudent choice for everyone. Even the Federal Eleventh Circuit Court which includes Florida has recognized that arbitration Aordinarily brings hardships for litigants along with potential efficiency. The Court recognized that arbitration participants often lack Adiscovery, evidentiary rules, a jury, and any meaningful right to further review. The following are a list of factors to consider when deciding whether to arbitrate:

The costs associated with Arbitration depend on the forum in which the arbitration is conducted. The filing and forum fees can range from nominal amounts to upwards of $25,000, depending on the complexity of the matter and the amount in dispute. Most arbitration forums publish a fee schedule. Also, parties can elect to privately arbitrate, and avoid such fees altogether. In many cases, the parties must also pay the fees of the arbitrators hearing the matter. In spite of the arbitration fees, due to the efficiency and expediency of arbitration, participants can realize significant costs savings when compared to the costs associated with trial.

Courts have recognized that one of the reasons parties agree to arbitrate is to avoid the risks of prolonged litigation. On average, arbitration proceedings conclude in less time than litigation in court especially if judges have overloaded dockets. While litigation and a subsequent appeal may take several years, arbitration generally concludes within a year. However, there have been instances where arbitration has continued throughout numerous years. The amount of time consumed in arbitration depends, for one, on the complexity of the case and the basis for the claims.

Discovery of documents and information from one’s opponent can be drastically reduced in arbitration. By agreeing to arbitrate, Courts have recognized that Aparties have elected to forego the usual civil procedures - including, for example, discovery and the rules of evidence - in favor of a swifter, less expensive resolution of their disputes. Arbitrators are Anot constrained by formal rules and retain Abroad discretion to control the order, procedure, and presentation of evidence. Because arbitrators are Asummary in nature there is Aonly restricted inquiry into factual issues.@ As such, third party subpoenas may be difficult to enforce, and arbitration participants may have to proceed with less information, evidence, and documentation than if in court.

Each arbitration forum has its own rules. Generally, although the Rules of Evidence apply to arbitration proceedings, they are greatly relaxed and loosely followed. Hearsay, and other evidence generally kept out at court, may be considered by the arbitration panel. As such, courts have held that an arbitrators discovery order is not subject to judicial review.

There is no judge or jury in arbitration. The case is presented to an arbitrator or arbitration panel. Arbitration panels may pose a greater risk for bias or impartiality. In court, judges are neutrally chosen by case assignment; however, an arbitration panel is usually chosen by the parties themselves, most likely from an arbitration agency like the American Arbitration Association or the National Arbitration Forum, or appointed by the court. Some parties may seek out arbitrators with a predisposition or bias for their side. Participants who frequently arbitrate, like employers or brokerage firms, may have an upper hand because they may know the arbitrator's records and predispositions, while inexperienced participants may not. Also, arbitrators may be inclined to please those who frequently submit disputes to arbitration to get business. However, courts have been reluctant to Aindulge the presumption that the parties and arbitral body conducting a proceeding will be unable or unwilling to retain competent, conscientious and impartial arbitrators.

Arbitration proceedings are confidential, unless otherwise agreed, and Federal courts have held that arbitrators generally have no obligation to the court to give their reasons for an award. Courts have also recognized that the record of an arbitration proceeding Ais not as complete as it is in a court trial. Traditionally, in arbitration, there is no stare decisis or precedent to guide the participants. As such, it is difficult to for lawyers to advise their clients about the possible outcome of a matter.

Arbitration is a confidential and private process, and is not open to the public. In most matters, arbitrators are not required to submit a publicly-available written opinion regarding the arbitrations outcome and the arbitrator's reasoning. As such, arbitration may be favored by those avoiding the unwanted publicity associated with a public trial, and disfavored by those seeking to set legal precedent or to expose a lawbreaker.

So, arbitration is a mixed bag. If you are having a contract prepared, you should consider these pros and cons before including an arbitration clause. At VolkLaw attorney can help you make the right decision.