What’s Holding You Back? 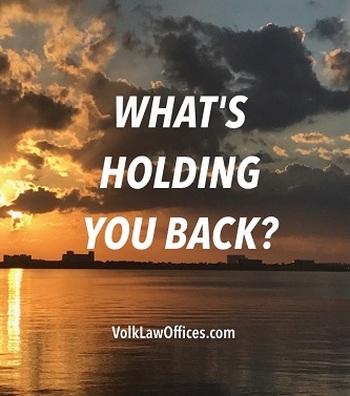 Get in gear for the New Year!

The New Year is approaching and you likely already have some thoughts on how you want to make 2017 a better year, right?  Take a few minutes to reflect on your accomplishments, things you learned, people who impacted you.    Did you maximize your year?   Sometimes we allow things in our life to hold us back from being all that we can be (isn’t that the Army slogan?).  What held you back this year?

Here are some ideas to help you get in gear for the New Year:

1.  Where are you going? Create some short term and long term goals (12+months) for what you want to accomplish.  Your long term goals will help you determine which roads to take,  And your short term goals will be great markers along the way.   One example of a short-term goal to complete by the end of the week might be: “I will write out my goals to accomplish for 3-months, 6-months, and a year.”    Tip:   Watch out for our VolkLaw blog articles on “Goal Setting” and “Mission Statements”.  Click Here to go to our blog page.

2.  Timing is everything. Make sure you put a target-date on each of your goals.  Having an idea of when you want to accomplish your goals, and meeting those target dates is vital to your success.

3.  Keep Going. If you come across an obstacle – find a way around it.  Whatever you do – Don’t Quit!   Write your goals down.  Hire a coach.  Recruit a mentor.  Whatever you need to do to make sure you don’t give up.

4.  Get Rid of Fear. Fear can hold us back from our careers, our relationships, and from accomplishing our dreams.  Some common fears include:

All of the above fears can be overcome by one thing:  Confidence.    Easier said than done, right?  If you’re lacking confidence – do something about it!  Seek outside resources to find a way to gain more confidence in yourself.

5.  I’m too old or too young. Age is just a number.  Michael Phelps was only 15-years-old when he won his first Olympic Gold medal in 2000.   Hershel McGriff was 81 years old when he competed in the NASCAR series race in 2009.  Donald Trump (age 70 at inauguration) will surpass Ronald Reagan (age 69 at inauguration) when he is sworn in as the 45th President of the United States on January 20, 2017.

6.  Stop Procrastinating. As the Nike slogan says:  “Just Do It.”  In fact, while we’re on the topic, why wait until the New Year to make your life better?   Just do it already.  Move forward.  Start writing down your goals and come up with a plan to get it done.

Have a great 2017!  Below are some of our favorite quotes from superstars who have figured out how NOT to let anything hold them back from achieving greatness.

“There may be people that have more talent than you, but there's no excuse for anyone to work harder than you do.” -- Derek Jeter, New York Yankees shortstop (1995-2014)

"If you have everything under control, you're not moving fast enough." -- Mario Andretti, world champion racing driver (1968-1982)

"Age is no barrier. It's a limitation you put on your mind." -- Jackie Joyner-Kersee,  Olympic heptathlon and long jump champion (1984-2000)

“Somewhere behind the athlete you’ve become and the hours of practice and the coaches who have pushed you is a little girl who fell in love with the game and never looked back… play for her.” -- Mia Hamm, award-winning professional soccer player (1987-2004)

“You can’t put a limit on anything. The more you dream, the farther you get.”-- Michael Phelps, Olympic-medal winning swimmer (2000-present)