Good Boss, Bad Boss and the Wisdom of Office Space 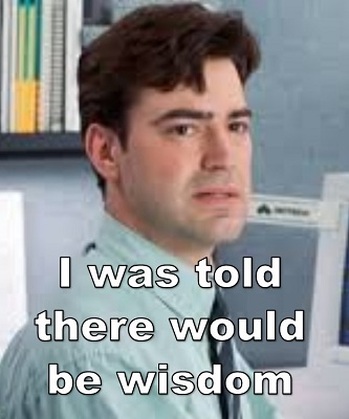 Several blogs ago, I addressed the qualities of a good employee who is viewed as indispensible. This time, let’s look at attributes of a bad boss with a little wisdom from the movie, “Office Space” to guide us.

The protagonist is named Peter Gibbons. He has a bad boss. Several actually. He is a software programmer who is miserable. He views his job as horribly boring and the company structure as soul-crushingly over-managed and insensitive. After being dragged to an occupational hypnotherapist by his cruel, cheating girlfriend, he is left in deep emotional comfort and happiness when he is hypnotized into a state of deep and complete relaxation. The hypnotherapist has a heart attack and dies before he brings Peter back to his normal state.

Peter can now speak freely about how he views his job and he has a perfect opportunity when the company brings in management consultants to, essentially, make each employee justify their existence. Peter, free to speak his mind, tells them how awful his job is instead of groveling to save it.

Peter Gibbons: “It's a problem of motivation, all right? Now if I work my ass off and Initech ships a few extra units, I don't see another dime, so where's the motivation? And here's something else, Bob: I have eight different bosses right now.”

Bob Slydell: “I beg your pardon?”

Peter Gibbons: “Eight, Bob. So that means that when I make a mistake, I have eight different people coming by to tell me about it. That's my only real motivation is not to be hassled, that and the fear of losing my job. But you know, Bob, that will only make someone work just hard enough not to get fired.”

His interviewers are stunned. They delve deeper.

Bob Slydell: “You see, what we're actually trying to do here is, we're trying to get a feel for how people spend their day at work... so, if you would, would you walk us through a typical day, for you?”

Peter Gibbons: “Well, I generally come in at least fifteen minutes late, ah, I use the side door - that way Lumbergh can't see me, heh heh, and, uh, after that I just sorta space out for about an hour.”

Peter Gibbons: “Yeah, I just stare at my desk; but it looks like I'm working. I do that for probably another hour after lunch, too. I'd say in a given week I probably only do about fifteen minutes of real, actual, work.”

So, Peter gets fired, right? Wrong. He gets promoted, because the consultants view him as candid and a real go-getter.

That does not make Peter happy. He is surprised and amused. And, still does not like his job. Peter tells one of his friends that he has discovered the field is not right for him. He thinks it is not right for anyone.

Peter Gibbons: “It's not just about me and my dream of doing nothing. It's about all of us. I don't know what happened to me at that hypnotherapist and, I don't know, maybe it was just shock and it's wearing off now, but when I saw that fat man keel over and die - Michael, we don't have a lot of time on this earth! We weren't meant to spend it this way. Human beings were not meant to sit in little cubicles staring at computer screens all day, filling out useless forms and listening to eight different bosses drone on about mission statements.”

Office Space is the product of Mike Judge who probably felt Peter’s disdain for a job he was not right for. Judge was highly intelligent and disliked what he did coming out of school. Judge graduated with a Bachelor of Science in physics in 1986 from the University of California, San Diego. After graduating with a bachelor of science in physics, Judge's first job was as a programmer for the F-18 fighter at Support Systems Associates, Inc. In 1987, he moved to Silicon Valley to join Parallax Graphics, a startup video card company with about 40 employees based in Santa Clara. Disliking the company's culture and his colleagues ("The people I met were like Stepford Wives. They were true believers in something, and I don't know what it was.") He quit after three months and meandered around until beginning a career in entertainment as a creator of movies and animated shows. Silicon Valley on HBO is the most recent.

So, what does this have to do with being a good boss? Good bosses do several simple things. Good bosses find the right people and they train them effectively. You cannot hire the wrong person and expect it to work out. You cannot make a Peter Gibbons like his job. He was wrong for it when hired and would always be wrong for it. So, take your time in selecting people. Don’t feel panicked to filling a seat or staffing up if business is good. Desperation causes us to overlook things in the screening and hiring process that should make us pause. A standard management rule is ‘slow to hire and fast to fire.’ If you have an unmotivated poor performer on your team, you are very likely to obsess over someone you cannot change instead of focusing on and appreciating the motivated achievers on your team. So, the poor performer probably hates you and the good people feel left out.

Good bosses worry about the company culture and its effect on people. If the fit is not right, you have to try to get the underperforming person quickly on track and create consequences for poor performance or indifference. A business advisor recently told me, getting mad is not a good strategy. Get it fixed and accept when it cannot be fixed. I once told a now former employee, ‘I can help make you a star, but you have to want it and show that. I cannot change you. Only you can do that.’

The person did not want to change. Don’t get me wrong, this is a nice person. He was, however, happy just the way he is. I still like the guy, but you can also have performance expectations and like a person. If I get mad at someone that does not want to perform at a VolkLaw level, I am making a big mistake. We have to see things for what they are. Remember always, you can’t teach a pig to whistle. It won’t work and it annoys the pig. Mark Twain, Robert Heinlein, and George Bernard Shaw all wrote variations on that theme so it must be solid.

So, you have picked the right candidate for the job. What now?

Good bosses don’t establish a micromanaging culture. Good employees take pride in their work and their good judgment. They want independence and to be challenged by their work. That person will bristle if micromanaged. If they learn quickly or know how to do their job effectively, you need to make that person feel appreciated. High achievers can have thin skin. A lot of them feel like they have something to prove and they want you to notice they are proving something. If they do good work, it makes most people feel happy to feel noticed.

If you have a talented person who wants to do great work and will live up to the company standards of performance, get that person trained as quickly as possible and get out of their way. Then, monitor the performance and make sure the person is headed in the right direction and stays on that path. You want to select people that can take constructive criticism, because the training process and routine reviews can make a thin skinned person very unhappy.

So, summed up, hire the right person, give them good training, keep their work interesting, and let them know you appreciate them. This is a lot harder than it sounds, but what we believe, we can achieve.

David Volk, a Business Litigation Attorney with Volk Law Offices, P.A., has 29 years’ experience and can be reached at help@volklawoffices.com or by visiting VolkLaw online at VolkLawOffices.com