Are You a Melting Ice Cube? 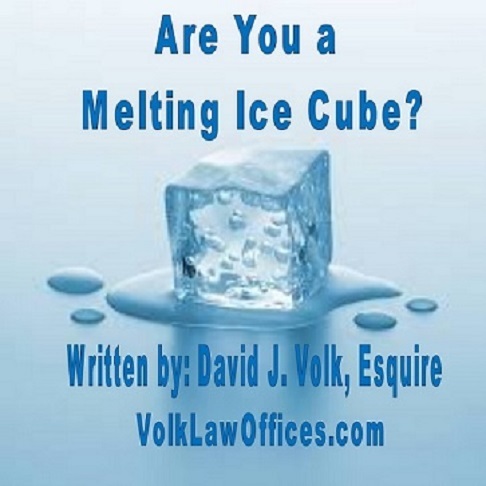 We should view work as a sport where we continuously try to get better. Why? If you do not, you are a melting ice cube. Melting ice cubes go from effective to not effective. They lose the power to affect the situation they are needed for. When we become complacent, someone else that does not accept the status quo is trying to improve and they will pass you by. The melted ice cube also dilutes the strength of its environment.

I credit Barry Diller for the ice cube concept. In an October 24, 2017 Wall Street Journal interview, he said companies he was involved in acquiring worked better as independents than under a large corporate structure. "If you really want a company to continue to innovate, they've got to be on their own melting ice cube." (Is Regulation Ahead For Giants of Tech?  Wall Street Journal, October 24, 2017, R5)

I varied the theme, but the point remains the same. Innovate or fade away. You must continue to improve. If you don't, others will do that and will pass you by. Anyone bought a Compaq computer recently? Anyone think they will be a valued employee if they say "I'm just not good on a computer!"

I expect members of my team to continuously improve individually and in collaboration with others. Some get a job and think the heavy lifting is over. Those people have a lot of jobs in their lifetime. You cannot coast through work these days. If you coast, you are going downhill. We need to ask, am I just along for the ride or does my patient persistent effort to learn and improve and do great works contribute to my success and success for my team?

Everyone must know they affect the others around them. You can lift others up or drag them down. We all know a Debbie Downer. She routinely feels awful. She wants to help ease her misery by making you feel awful. That way, she won't feel as relatively awful since you feel awful too. Debbie Downer is a melting ice cube diluting the environment.

How do we make the turnaround if we are one form of melting ice cube or another?

We have to be less complacent. That job or business will not be there forever if we coast. If they have achieved any level of success, your boss, or top management, or  customers are probably not complacent. They are probably eagles. And, eagles want to soar with eagles. They don't want to be surrounded by turkeys.

Don't fall in to the trap of thinking 'everything is going great for me!' There may be a lot going your way, but if you don't innovate, it won't last forever. How do you personally innovate? Work diligently at doing everything you do better and faster. Stand out from the crowd. If you have production responsibilities, exceed them.

It can turn into a game. I got to be a very fast typist because I had some legal assistants who could type with blazing speed and great accuracy. One was so fast, I had to keep buying her new keyboards because she kept melting them. Or something like that. Anyway, I wanted to be able to do that. I am not at that level yet, but I routinely surprise myself at where I am at. Every time I type, I try to type as fast as I can. With continuous practice like that, the speed and accuracy continues to improve. Now, I can even do it well under pressure because of the practice. (By the way, it was a difficult process and I am very happy that I made the effort.)

Here is the more important path to continuous improvement. Have a little anxiety that someone wants to pass you by and take your job or your customers.

That someone that is coming fast is not just a person or competitor. It is technological innovation and it is a serious threat to all of us. It is getting hot in here for all of us. Artificial intelligence is here and it is rapidly developing. It is a freight train barreling down on most of us. It is replacing humans in many ways. It will be a much greater disrupter than the personal computer. It will affect all industries. The biggest benefit and threat: it can learn immensely faster than we mere mortals. Google and read a few articles on the subject. In particular, look at super artificial intelligence. It is the stuff of science fiction come to life. Elon Musk is a pretty smart guy. He is aggressively sounding the alarm. The Terminator movies don't seem far-fetched anymore.

The robots are not coming. They are here already. Robotics has broken out in a massive way in manufacturing. I did a Chapter 11 for a client about twenty years ago. His company built robotic assembly machines and it was fascinating what they could do. The guy was ahead of his time and could have used more capital, but the field of work did not stop. Lots of others were doing it. Now, it is here in a big way. It is a driver for onshoring instead of offshoring manufacturing, because a lot less human labor is needed. Jobs fled offshore to find a lower human cost of manufacturing. With machines doing the work, the math is a lot different.

And, foreign companies can build plants here to avoid currency fluctuation and protectionism risk. Don't believe me? Open YouTube and search for "BMW Production at the Spartanburg Plant." Prepare to be shocked. Robots perform the heavy assembly work. Panels are pristine. Seams line up perfectly. Paint flaws are rare to nonexistent. Humans used to stamp the metal and move it. They used to put the panels together. They used to do the painting. It is a brave new world not for the faint of heart. Don't be Polaroid in a digital photography world or a secretary that types up dictation tapes. Get better every day. Adapt and improve. Master old skills and learn new ones. Have a sense of urgency. It is later than you think.

Be better. Be more and more and more valuable every day. Innovate and give more bang for the buck whether the buck is your paycheck or payment of an invoice. People are counting on you not melting away.

David Volk, a Business Litigation Attorney with Volk Law Offices, P.A., has 30 years’ experience and can be reached at help@volklawoffices.com or by visiting VolkLaw online at VolkLawOffices.com